Should You Avoid Full Squatting?

Should You Avoid Full Squatting?

Squatting is one of the most widely used and effective movement patterns for developing strength and muscle in the front of the legs (quadriceps).   Squatting depth is often defined as either half or full squat depth.  The half squat is defined as squatting to knee angles of 40°-45°, while the full or deep squat describes squatting at of knee angles of 80°-100°.  It has been suggested that full or deep squatting should be avoided due to increase stress on the knees, thereby exposing to higher risk of knee injury.  However, this suggestion does not take into a number of influences that work to protect the knees with increased squat depth.  This article will examine the forces applied to the knees during the half and full squat and highlight some of the mechanisms that function to protect the knees in a deep squat position. 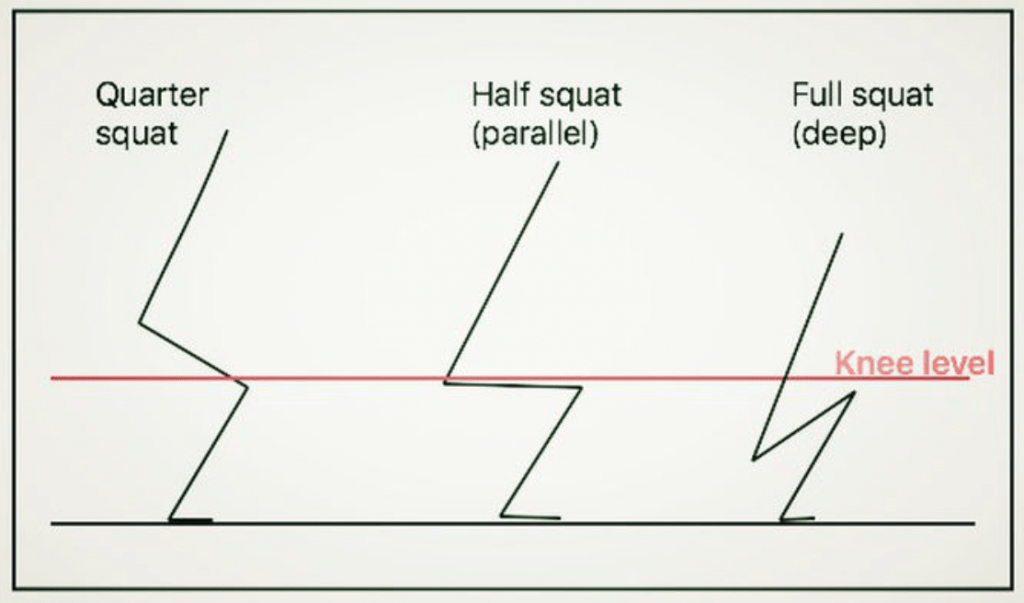 A Look At the Evidence

When squatting to full depth, a reduction in shear forces on the knees have been demonstrated specifically to the anterior cruciate ligament (ACL), a knee ligament that prevents forward movement of the shin bone over the thigh bone (tibiofemoral translation).  Multiple authors have demonstrated that, in cadaver knees, opposing hamstring load and quadriceps load minimize shear forces on the knees by limiting tibiofemoral translation and as a result reduced tensile forces on the ACL.  Hartmann et al. (2013) published a review in Sports Medicine that examined over 164 articles published between 2011-2013 and found there are no realistic estimations of increased knee-joint forces for knee-flexion angles beyond 50° in the deep squat. Also, based on biomechanical calculations and measurements of cadaver knee joints, the highest compressive forces and stresses on the knees can actually be seen at 90°, indicating that greater stresses on the knee occur when half squatting not full squatting [4].

Another reason deep squatting is safe for the knees is that with increased knee flexion beyond 90°, it has been suggested that a “wrapping effect” occurs, whereby the additional contact between the quadriceps (thigh muscle) tendon and the intercondylar notch (the groove between the two rounded ends of the thighbone) contributes to an enhanced load distribution and force transfer.  Therefore, a lower risk of injury in the deep squat position can be expected.

Furthermore, the adaptation potential of ligaments is well established from training studies.  For example, training has been shown to increase tensile strength and enhance stiffness and elasticity of the ACL knee ligament. Grzelak et al. (2012) demonstrated significantly larger ACL cross-sectional area of young weightlifters compared with age matched controls [3]. The cross-sectional area of the ACL and posterior collateral ligament (PCL) of these weightlifters were found to be 50% and 61.49% larger than those of the cadaver studies.  Given this, continual squatting at depth would gradually increase the tensile strength, and hence lower risk of injury of these knee structures [3].

Finally, if one argues that knee problems occur in those populations who frequently perform deep squats, it could be reasonable to suggest that international weightlifting athletes are predisposed to a high prevalence of acute and chronic knee injuries with long training interruptions.

However, Calhoon et al. (1999) studied 27 weightlifters from different US Olympic training centres and showed that only 3.3 injuries occurred per 1000 training hours over a 6-year period. Of missed training time due to knee problems, 95.3 % lasted 1 day or less, and in the remaining cases, lasted less than 1 week [2].  Also, these training interruptions were primarily related to tendinitis due to chronic overuse and in very few cases to muscle strains due to acute injuries [2].  These findings were echoed by Lavallee et al. (2010) in a 4-year retrospective study that found of 1,109 weightlifters (age 12–20 years) that participated in national or international competitions, zero showed any injuries (i.e. at the knee joints) that required surgery or hospitalisation [5].

There is sufficient evidence to suggest that a number of mechanisms function to protect the knees during increased squat depth.  Even when examining knee injuries among international weightlifting populations, who clearly squat at depth, there is no evidence of training absences due to knee related injuries.   Furthermore, from an anatomical perspective, normal range of movement for the knee joint is 110 – 130 degrees of flexion.  Given this, it is also reasonable to suggest that squatting below 90 degrees of knee flexion adds functional value.