Muscle tone, formally called muscle hypertrophy, is an increase in the size of muscle tissue [3].  Exercise, specifically resistance exercise. in all its forms, has been demonstrated to increase muscle hypertrophy [3].  Muscle tone and development occurs when muscles are subjected to stress from resistance exercise eliciting an adaptive response [3].  Adaptation, whereby the body adjust to its environment, is a key feature of all living species [3].  In exercise, the body adapts to the stress (i.e. resistance) imposed on it by getting larger and stronger to better cope with this stimulus when exposed again [3, 7].  This adaptive response continues as long as the physical stress is regularly applied [7].

For individuals new to resistance exercise, there is an initial period of skill acquisition and motor pattern learning [7].  During this phase, the body is learning the movement and gaining important coordination [6, 7].  As an exercise is learnt (skill acquisition), the movement progresses from being disorganised and uncoordinated to smooth and efficient [7].  This initial period of motor learning and skill acquisition is essential for muscle tone and development [7].  Improvement in exercise technique corresponds with greater force production within a given exercise, which in turn can result in more muscle growth [7].

Muscle tone and development is predicated on the body’s ability to maximally recruit what are called motor units and their associated muscle fibres [6].  As our muscles are innervated by the nervous system, a motor unit is defined as an individual motor neurone stemming from the spinal cord and the muscle fibres it innervates [3].  Muscle fibres are the cells that make up muscle and can be broadly classified into type I and type II [3, 6].  Often referred to as slow-twitch, type I fibres are fatigue resistant and more suited to muscular endurance [7]. Slow-twitch fibres can endure repeated contraction, however have limited capacity to generate force [3, 7].  In contrast, type II fibres produce maximal force much quicker, making them well suited for muscular strength and power [3, 7].  However, despite their capacity to generate high amount of force, fast-twitch fibres fatigue easily [3, 7]. 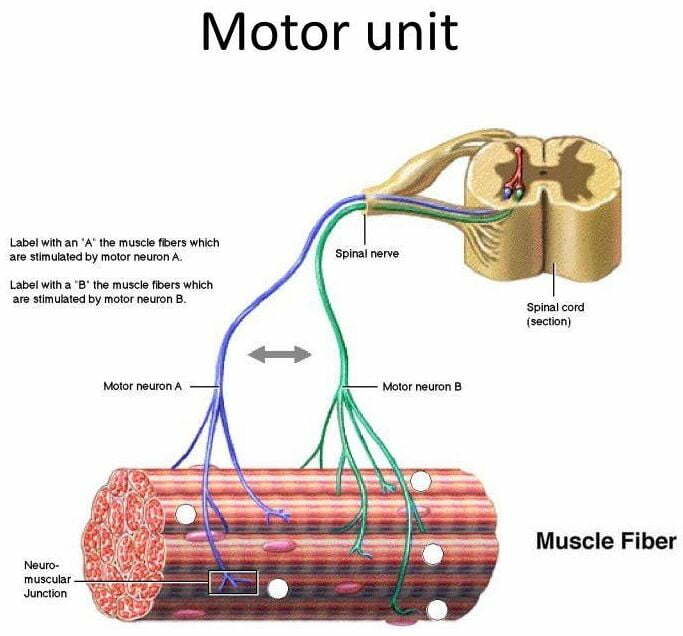 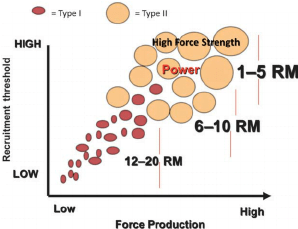 It has been shown that repetitions taken closer to failure, the point where the weight cannot be lifted anymore, generates more muscle growth than repetitions further from failure [2, 4].  This is due to muscle fibre recruitment [1, 4].  As previously indicated, more muscle fibres and motor units are recruited when lifting close to failure due to increased force demands [2, 3, 4].  Repetitions taken close to failure have been called “hypertrophic” or “stimulating” repetitions because of their importance in generating muscle growth [4].

The effect of repetitions taken closer to failure were demonstrated by Burd and colleagues in 2010 [2].  In their study, 15 healthy, recreational active men performed different levels of resistance using a machine leg extension performed single leg [2].  The three conditions were: 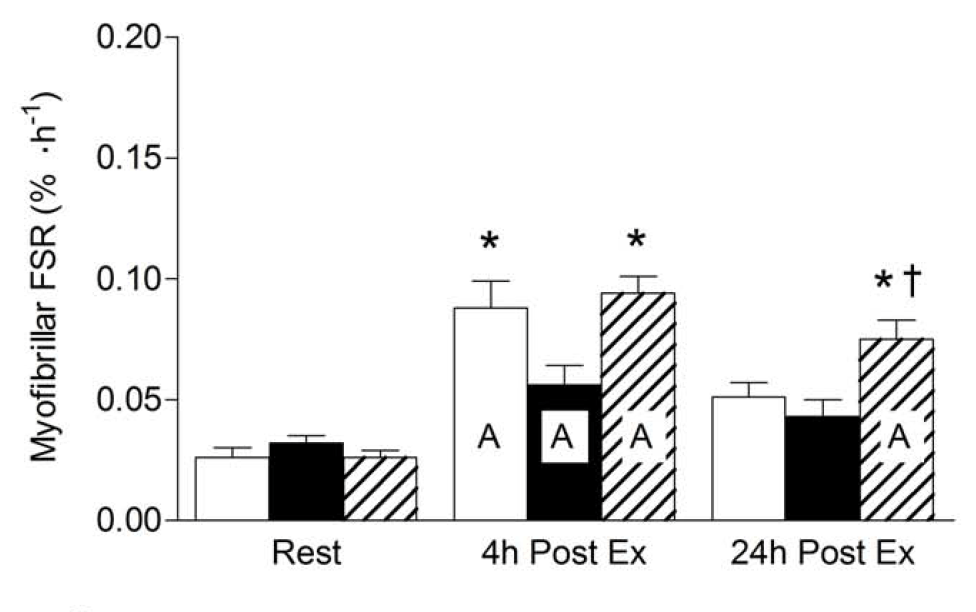 The Role of Fatigue In Muscle Tone & Development

The role of fatigue during exercise is an important factor within motor unit recruitment [1, 4].  Even under low loads (i.e. light resistance), when fatigue increases and the muscle gets closer to failure, more muscle fibres are recruited and with them, larger, higher-threshold motor units [1, 4].  Moreover, these larger, higher-thresholds motor units activate recruitment of fast-twitch fibres because of the increased need to generate more force [3, 6].  For example, for a given exercise, with light-to-moderate resistance the first several repetitions will likely feel light and require little force.  At this point, there is a low number of lower threshold, slow-twitch fibre recruited.  However, as the set continues, provided the lifter continues lifting the load, the resistance begins to feel heavier and force production needs increase in an effort to keep the resistance moving [6].  As this force production increases, not only are slow-twitch fibres recruited, but also fast-twitch fibres [6].  In the Burd (2010) study, the role of fatigue would explain why the 30FAIL group achieved maximal muscle fibre and motor unit recruitment similar to the 90FAIL despite lifting considerably different loads.

Schoenfeld and colleagues (2016) demonstrated this their study aimed at determining muscular adaptations differences between heavy and moderate load resistance exercise[ 5].  In their study, 19 males subjects with resistance training experience (4-5 years) were randomised to either a heavy or moderate exercise group [5].  The heavy group performed 2-4 repetitions, while the moderate group performed 8-12 repetitions [5].  Each set were taken to close to failure [5].  The subjects exercised 3 days per week for 8 weeks [5].  Both groups completed 7 exercises for the upper and lower body [5].  Muscle tone was determined using ultrasound imaging of the back of the arm, front of the arm, and outer thigh [5].  Results of this study showed greater increases in muscle growth in all three areas among subjects in the moderate group compared with heavy group [5]. 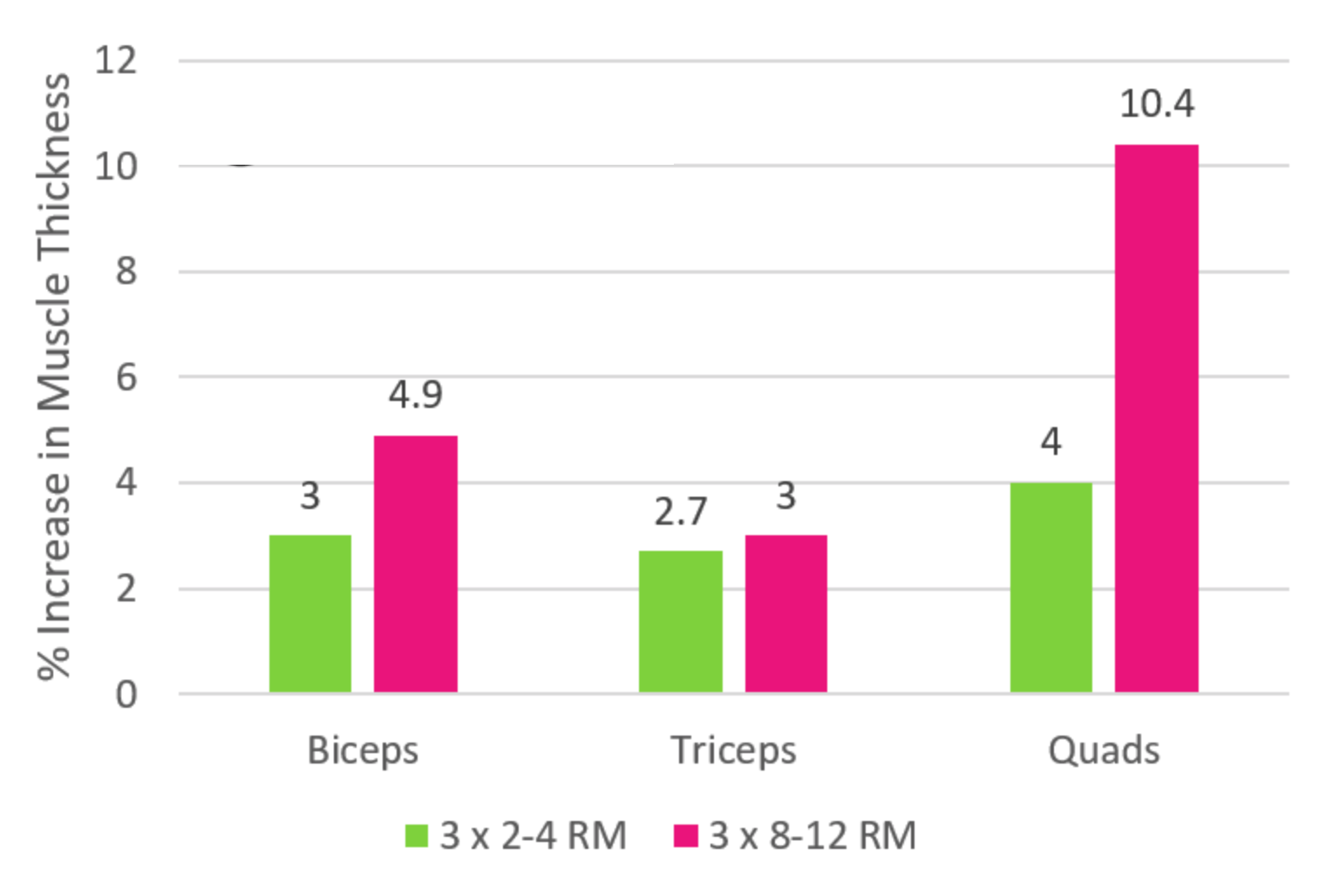 The superior muscle development experienced in the moderate group can be explained by increases in exercise training volume [5].  A dose-response relationship between total weekly volume per muscle group and muscle hypertrophy has been well established.  This means that, up to a certain point, the more volume (i.e. repetitions x sets) performed per muscle group, per week, the greater the muscle growth [5].  Although both groups completed sets close to failure, the total weekly exercise volume in the moderate group were more than double than the heavy group.

Muscle tone and development is dependent upon the ability to maximally recruit motor units and their associated fibres [6, 7].  There are two ways in which a high number of motor units can be recruited [4]:

Heavier weights, provided they are taken close to failure, will maximally recruit all available motor units and activate type I and type II slow and fast twitch fibres, although primarily type II fibres [6].  Lighter weights, taken close to failure, will similarly recruit all available motor units and both fibre types. Lighter weights accomplish this via the role of muscle fatigue and increasing force requirements as the muscles move closer to failure [1, 2].  Using moderate (i.e. 6-15) or high (i.e. 16>) repetitions have an advantage for muscle growth over lower repetitions (i.e. <5) because of the increased time the muscles are under tension and higher volume of work.

It has been suggested that taking a given exercise 1-5 repetitions from failure elicits the same response as going to failure [1].  Therefore, going to absolute failure is likely not necessary.  Important to note, repetitions to stimulate muscle growth fall on a continuum [4].  Even repetitions completed much farther from failure will elect some hypertrophic response [4].  However, this response will be less than those repetitions taken closer to failure [4].  Also, important considerations in taking exercises close to failure are proper technique and exercise experience.  As the working muscles fatigue going closer to failure, it is imperative, from a safety and performance quality standpoint, to retain proper technique.  Moreover, individuals new to resistance exercise should prioritise skill acquisition in coordinating to exercises before gradually taking sets closer to failure.

[5] Schoenfeld, B. J. 2016. Differential Effect of Heavy Versus Moderate Loads on Measures of Strength and Hypertrophy in Resistance-Trained Men. Journal of Sports Science and Medicine. December. Vol. 15, No. 4, pp. 715-722.