Daily undulating periodisation (DUP) and linear periodisation (LP) are both concepts that are based upon the last two decades of exercise science research.  DUP is a newer concept that manipulates training variables with greater frequency to maximise improvements in muscular strength, hypertrophy or athletic performance.

The purpose of all exercise is to apply stress to the body and interrupt homeostasis. which is the optimal internal environment the body functions under [8]. This occurs because the body views exercise as a threat to its survival and results in deviation from optimal homeostatic functioning. As a result, when we apply stress from exercise, the body undergoes an adaptive response to better cope with the stimulus in the future [8].

In 1936 Hans Selye developed a stress Theory of General Adaptation Syndrome (GAS) that explains how, under exercise stimulus, the body responds with a temporary decrease in performance followed by a return to, or above, the initial level of fitness [9]. This adaptation is called supercompensation and the primary explanation for why physical fitness levels improve from consistent exercise [9]. Importantly, if the exercise stimulus applied to the body remains unchanged from its initial magnitude (volume, intensity, frequency), the body accommodates to the stress and no additional improvements occur. [9].

A characteristic of LP is the progression of starting with high volume (repetitions and sets) and low intensity (load) and progressing gradually in intensity while decreasing in volume [2]. Provided below is an example of LP for a five-month macrocycle. In this example, the repetitions are relatively high at the beginning of the program in weeks 1-4 and intensity levels are lower. However, these variables are reversed towards the end of the program as the amount of weight lifting increases and the number of repetitions decreases.

Provided below is an example of DUP model for an individual that performs resistance exercise three days a week over a 4-week mesocycle. The final week incorporates a de-load week that uses lower intensities and volumes and functions as a period of recovery to prevent overtraining.  In the DUP example, volume (repetitions and sets) and intensity (percentage of 1RM) changes each training day. Also, at the start of each new week, intensity is altered again increasing from the previous week. 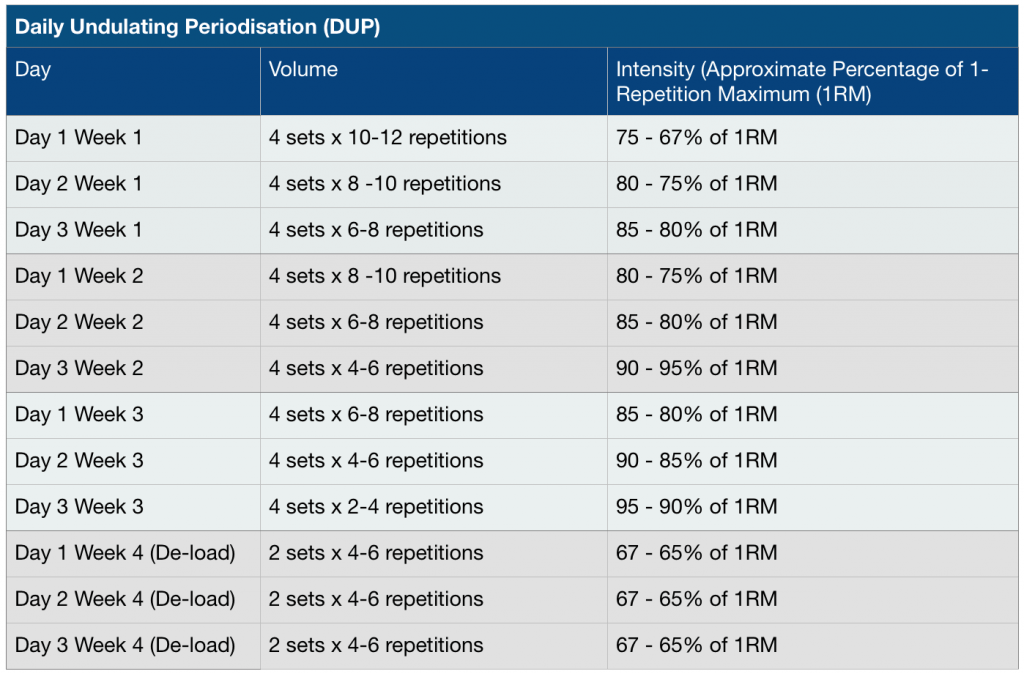 Provided below is an example of WUP for an individual that performs resistance exercise three days a week over the same 4-week mesocycle.  In the WUP example, volume and intensity are maintained for a week (microcycle), then altered the subsequent week.  It is not required that variables be changed to follow a set pattern as there a infinite methods to integrate undulating periodisation models.  In the below example, a week incorporating lighter intensity is interjected between week 1 and 3. 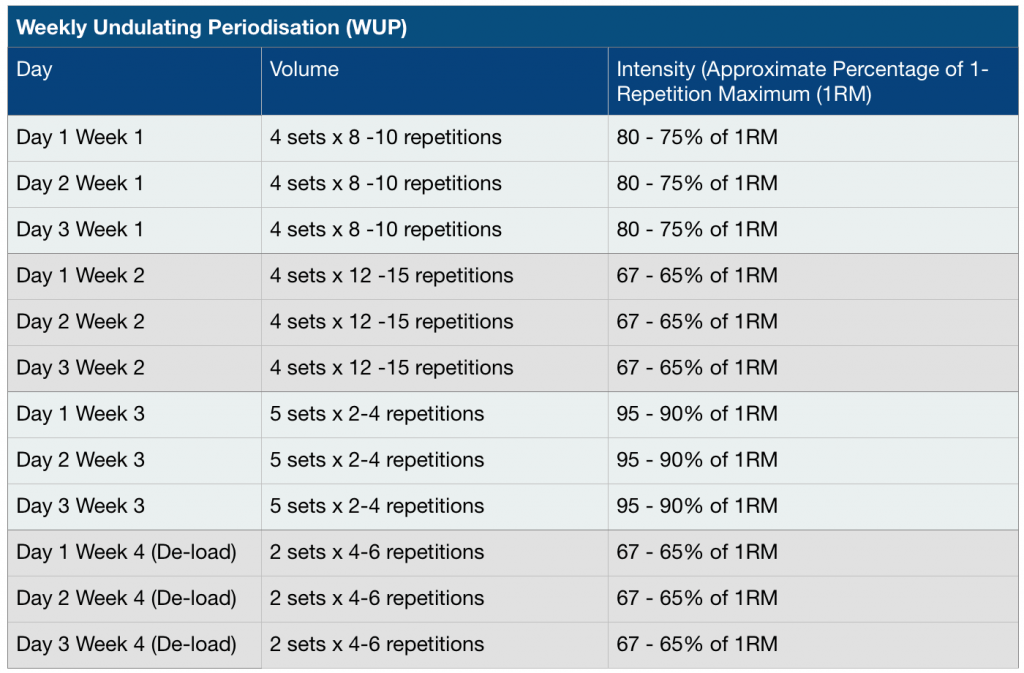 Multiple studies have examined undulating versus linear periodisation for strength improvements and lean muscle enhancement.  The earliest application of undulating periodisation can be found with the intensification and accumulation phases proposed by Poliquin (1988) [5].  For increasing strength, Poliquin first proposed short periodic integration of accumulation phases composed of higher volume and lower intensity with intensification phases of lower volume and higher intensity [5].

Since Poliquin’s proposed theory, a number of studies have evaluated DUP against LP for strength gains.  A classic study by Rhea and colleagues (2002) compared LP and DUP for strength improvements among resistance trained men [6].  In their study, the authors randomly allocated twenty men with about five years of training experience to ether a LP or DUP group [6].  One repetition maximum was tested for both the leg press and bench press [6].  Each group trained three days per week for twelve weeks.  Training protocols for each group consisted of the following [6]:

Both groups performed the same amount of training, however the DUP group ordered their training with shorter undulation in volume and intensity [6].  Interestingly, compared with the LP group, the DUP group experienced almost twice the improvement within the bench press 28.8% versus 14.4% and leg press 55.8% versus 25.7% [6].

A potential limitation within this study were that subjects within the LP group were stronger prior to commencing study possibly leaving greater room for strength improvement.

A similar, more recent study by Miranda and colleagues (2011) compared DUP with LP at 1RM and 8RM loads in the bench press and leg press [4].  Twenty recreationally trained men were randomly allocated to either LP or DUP and performed four weekly training sessions alternating upper and lower body sessions as follows [4]:

In the leg press, both groups similarly improved at 1RM loads (10% and 18% respectively) and at 8RM loads (17% and 23% respectively) [4].  Although no statistical significance was found between groups, the DUP group demonstrated a greater effect size (ES) in 1RM and 8RM loads for both bench press and leg press compared with the LP group [4].

While there is evidence to suggest that DUP may elicit greater strength improvements compared to LP, there is less available literature comparing different periodisation models on muscle hypertrophy (muscle development).  Schoenfeld and colleagues (2015) performed a study that randomly allocated 19 resistance trained men to two groups: VARIED routine and CONSTANT routine group [7].  For each group, the following resistance training protocol was used:

The authors of this study used ultrasound imaging to measure muscle cross sectional areas as a determinant of muscle growth [7].  Results showed that both VARIED and CONSTANT groups greatly improved in measures of muscle thickness for the elbow flexors (6.6% and 5.0%), elbow extensors (6.4% and 4.2%), and quadriceps (7.6% and 8.6%) [7].  Although no statistically significant between group differences were found, effect sizes favoured the VARIED group over CONSTANT group for elbow flexor thickness (0.72 versus 0.57) and elbow extensor thickness (0.77 versus 0.48), suggesting a possible benefit to daily undulating periodisation [7].

Notable limitations in the Schoenfeld study include muscle thickness measurement occurring only at the mid-point of each muscle and not at distal or proximal ends, which may have revealed differential growth changes [7].  Also, there were potential dietary compliance issues among subjects despite a dietary regimen [7].  Finally, failure to perform muscle biopsy may exclude the possibility of fibre-type specific adaptations [7].

In another study, Kraemer and colleagues (2003) examined the effects of varied versus constant condition loading over 9-months [3].  In their study, 30 women collegiate tennis athletes performed whole body resistance training 3-days per week using either a constant protocol (3 x 8-10RM) or varied protocol (4–6RM on Day 1, 8–10RM on Day 2, 12–15RM on Day 3) [3].  The authors used a 3-site skin fold measurement to assess body composition changes [3].  Results from this study showed significantly greater changes in fat-free mass in the varied group compared with constant group (3.3 ± 1.7 kg versus 1.6 ± 2.4 kg) [3].

Different to linear periodisation, undulating periodisation allows for variable loading through a selected period, which may prove advantageous for neuromuscular stimulation compared to a linear model.  With more frequent alterations in training variables (volume, intensity, frequency), daily undulating periodisation effectively functions to lessen the repeated bout effect, which states that the more the body is exposed to the same stimulus, the weaker the effect [9].

A number of individual studies suggest, compared with linear periodisation, there may be an advantage to applying daily undulating periodisation for strength development.  However, the available literature is far from definitive particularly among more athletic or highly trained populations.  General duration used in the available research is approximately 12-weeks, where longer term interventions would be required to assess the advantage of DUP over LP for strength improvement.  Fewer studies presently compare DUP with LP for muscle growth.  Only a few studies suggest that variable loading may prove more beneficial for muscle hypertrophy compared to constant loading.

For individuals beyond the beginner stages of resistance exercise, daily undulating periodisation is an excellent method for adding variety to one’s resistance training program to potentially increase strength and muscle growth.  Importantly, DUP and WUP models should be accepted as a template whereby an individual or personal trainer should still manipulate the design to fit their own or their clients training.

[6] Rhea, M. R. et al. A Comparison of Linear and Daily Undulating Periodised Programs with Equated Volume and Intensity for Strength. Journal of Strength and Conditioning Research. May. Vol 16, No. 2, pp. 250-255.